Speed ratings are based on laboratory tests where the tyre is pressed against a large diameter metal drum to reflect its appropriate load, and run at ever increasing speeds (in 6.2 mph steps & 10 minute increments) until the tyre's required speed has been met.

An important note that speed ratings only apply to un-damaged tyres. Additionally, most tyre manufacturers maintain that a tyre that has been cut or punctured no longer retains the manufacturer's original speed rating, even after being repaired because the manufacturer can't control the quality of the repair.

In 1991, the maximum speed capability of new tyres must be shown only in the speed rating portion of the tyre's service description, such as 225/50R16 89S. The most common tyre speed rating symbols, maximum speeds and typical applications are shown below: 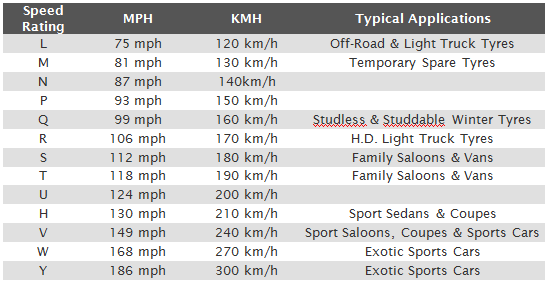 As vehicles have increased their top speeds into Autobahn-only ranges, the tyre speed ratings have evolved to better identify the tyres capability, allowing drivers to match the speed of their tyres with the top speed of their vehicle.